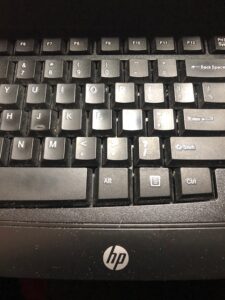 At one time, I concentrated on writing flash fiction, short stories, and short screenplays because that’s the way my mind tends to work, quick and fast. I enjoy fantasy, suspense, and all elements that lean towards the supernatural, or just plain quirky, so that’s what I tend to write. I can’t help myself.

Even a serious story about a man dealing with the sudden death of his wife turns into the whimsical tale of a storefront mannequin that’s stored in the attic suddenly singing one night.   Her voice comforts him, and they communicate as friends — he’s no longer lonely and doesn’t need the medication for depression; until she becomes restless and he becomes possessive.

I began writing a serial novel off and on for…oh, gee, has it been over thirteen years? That’s only because I’ve taken on several other projects, including a three-year art intern program. I really haven’t been back to it  since completing the first draft of part 1 and part 2 in 2011.  I’ve been rethinking it, keeping notes, had a youth read it and give me her notes, and making a really-not-an-outline outline so that I could return to it.

It’s been on hold for another two years, and now I feel a relentless urge to return to it.

However, not as  a novel, but as a choice narrative game. Maybe. I don’t know. It’s been so long since I’ve wrote my original web narrative choice game that it’s not getting the attention that it once received, therefore, I must write another one  in the very near future. Definitely a fantasy, definitely with a woman hero, definitely with a number of different type of characters that the player can choose from. I think that “To Plan C!” just may be it.

At least, that’s next on my agenda. In the meantime, I’m posting the introduction to the novel, “Aeos: The Beginning Of Time” for your enjoyment. Please leave comments.

In addition, as I’ll be working on my next interactive narrative game for Choice Of Games, LLC. , I’ll post excerpts without the coding here.

If you’re interested in reading my first interactive narrative game, “Who Was the Real Robin Hood?” you’ll find it HERE. Be aware, it’s not perfect (I was in a hurry to have it finished and published before I could go forward on another major project) but you should still get a kick from it (I hope!). Since I now know what I’m doing, the second will be better.  You can play Marian’s story for free, or pay a low price to play as Robyn Hood.

I appreciate the visitors and the comments.

All WPB images on lcwaites.com and thefantasimarts.com are not in the public domain and therefore cannot be used, lifted, or reproduced by any means without prior permission.